Dazzy (“Daisy”) Shah is an LA Based Canadian Production Designer, born in Gujarat, India. She graduated with a B.A. in Architecture from the University of Toronto in 2018, and a M.F.A in Production Design from Chapman University, California in 2021. She has been awarded for her work as a Production Designer on various international platforms, including the Paris Play Film Festival, Tokyo Shorts Festival, and the Eastern European Film Festival. Shah’s most recent credits include her work on Hulu’s Snowfall, Netflix and Mindy Kaling’s Never Have I Ever, Olivia Rodrigo’s Disney+ Documentary Premiere, and she currently works as an Art Department Assistant on the upcoming Netflix Feature Film, Atlas.

1. We are glad to have you here today! Can you briefly tell our readers what a Production Designer does? What are the various aspects of filmmaking that they are responsible for?


A: Thank you for having me! Sure, I get asked this question a lot! A Production Designer is the person responsible for bringing the words on a script to life in the form of sets, while keeping in line with the Director’s vision. He or she breaks down the script in terms of the mood and tone of the project, which would dictate the movie’s color palette, design aesthetic, references, etc. Designing TV shows, movies, music videos, and even commercials, is a very lengthy process, and the kind of materials required for each of these forms of media may differ from movie to movie and commercial to commercial. For example, a sci-fi movie may require for the Designer to pitch their designs to the producers through illustrations, 3D models, physical models, etc. before we reach the building phase. Whereas a 30-minute contemporary drama may only require mood boards and sketches for an idea to come across, before we move on to the drafting and construction phase of the project. All in all, Production Designers are worldbuilders of all the stories that you see on a screen.

Still from The House

Still from The House

2. We had a chance to watch your film, A Dire Strait, which has been getting quite a bit of recognition in the film festival circuit. What made you decide you wanted to design this film?


A: When my Director, Liang-Chun Lin came to me with the script, I was instantly drawn to the main character. A Dire Strait is about Demi, a young Taiwanese-American woman who has just given birth to a baby boy in a traditional Chinese household. Demi is fearful of losing control over her own body, and her baby, at the hands of her overbearing mother-in-law who dictates every aspect of her life, starting from her eating habits, her hygiene, and even her bathroom schedule.

The story really resonated with me for two reasons. Firstly, Demi’s struggle to maintain a balance between her in-laws’ culture and her own western ideals hit a personal chord. This sense of in-between-ness is a battle that many first-generation immigrants struggle with. Demi didn’t want to disrespect her in-laws, but she didn’t want to be untrue to herself either. That is relatable.

Secondly, I thought that the subject of this film, with the dramatic saas-bahu storyline where the daughter-in-law regains control of herself, was something that several contemporary Indian television shows seem to want to nail but fail due to their exaggerated and single-layered characters. Demi feels real where a lot of the characters in those saas-bahu shows do not, and I am really hoping that once we get our world premiere, we would be able to start circulating this movie in India too as I am curious about its reception. 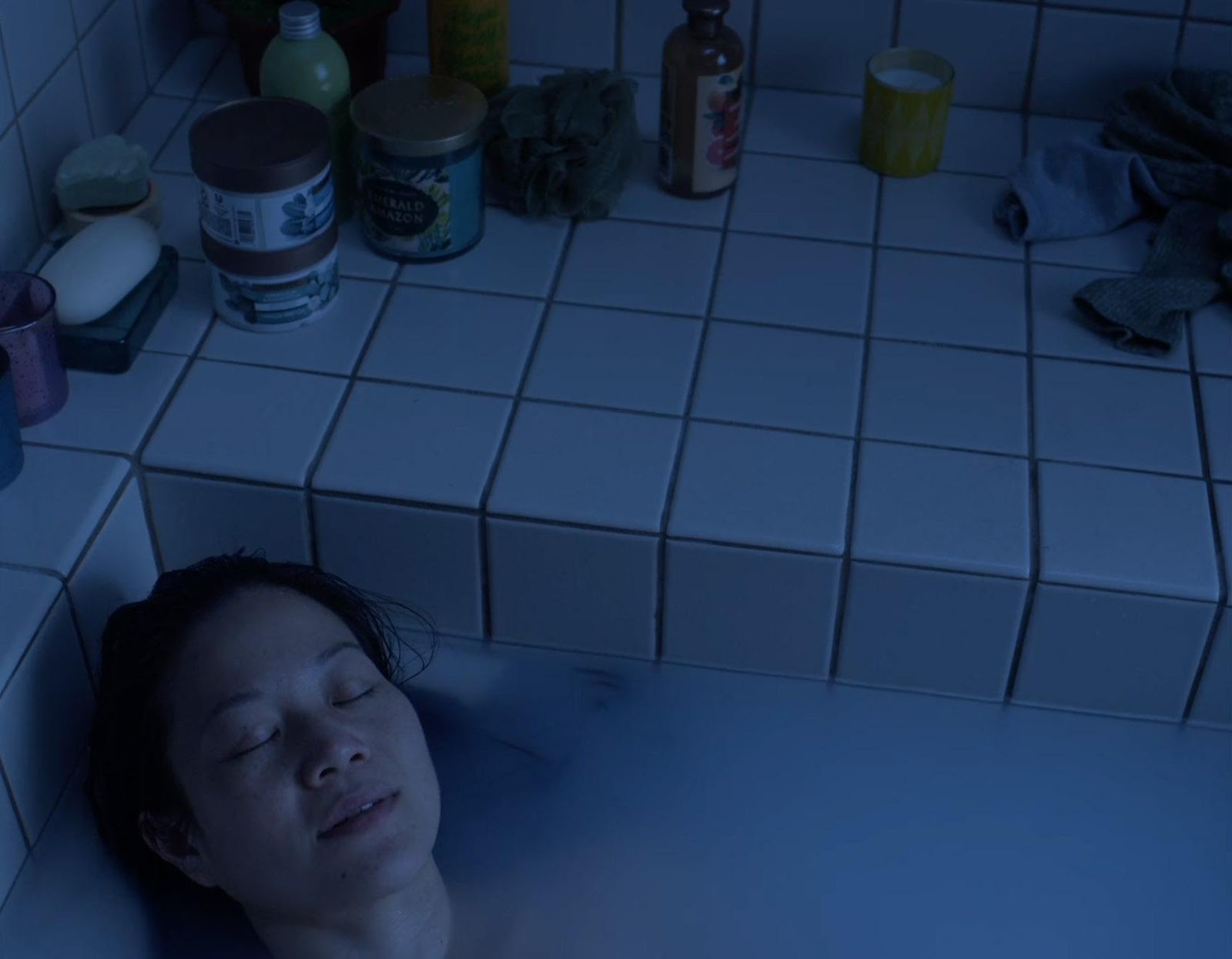 Stills from A Dire Strait

3. Can you tell us about some of the challenges that you faced while designing A Dire Strait? How did you overcome these challenges?


A: A Dire Strait is an independent short film, which meant that the funding was limited. This brought on a set of challenges, and opportunities for creative solutions. We were initially tasked with the challenge of making an existing Airbnb in Southern California look like a traditional, wealthy Chinese home. And then when the director opted to shoot the movie in two separate locations, we had to get creative to make the two locations feel like one single house as it was scripted. The solution was to be resourceful with what we had and think in terms of how we can cheat certain elements for the camera. In the end the entire bedroom, where over two-thirds of the movie takes place, was wallpapered. My art director and I gave one large wall a wooden panel treatment using contact paper, and another wall was covered using colored butcher paper, and we even customized a four posted bed where a large portion of the movie takes place. The colors and textures look fantastic on camera, and really stitch the two locations together, making the previously pale space look rich and vibrant and suitable for a Chinese household. We dug deep into the local prop house that was available to us and managed to get a set of armchairs whose silhouettes resembled traditional Chinese furniture for the living room and chose to invest in a few authentic wooden partition screens from the Warner Brothers Prop House to finish the look. I was thrilled with what my team and I were able to accomplish with our resources! 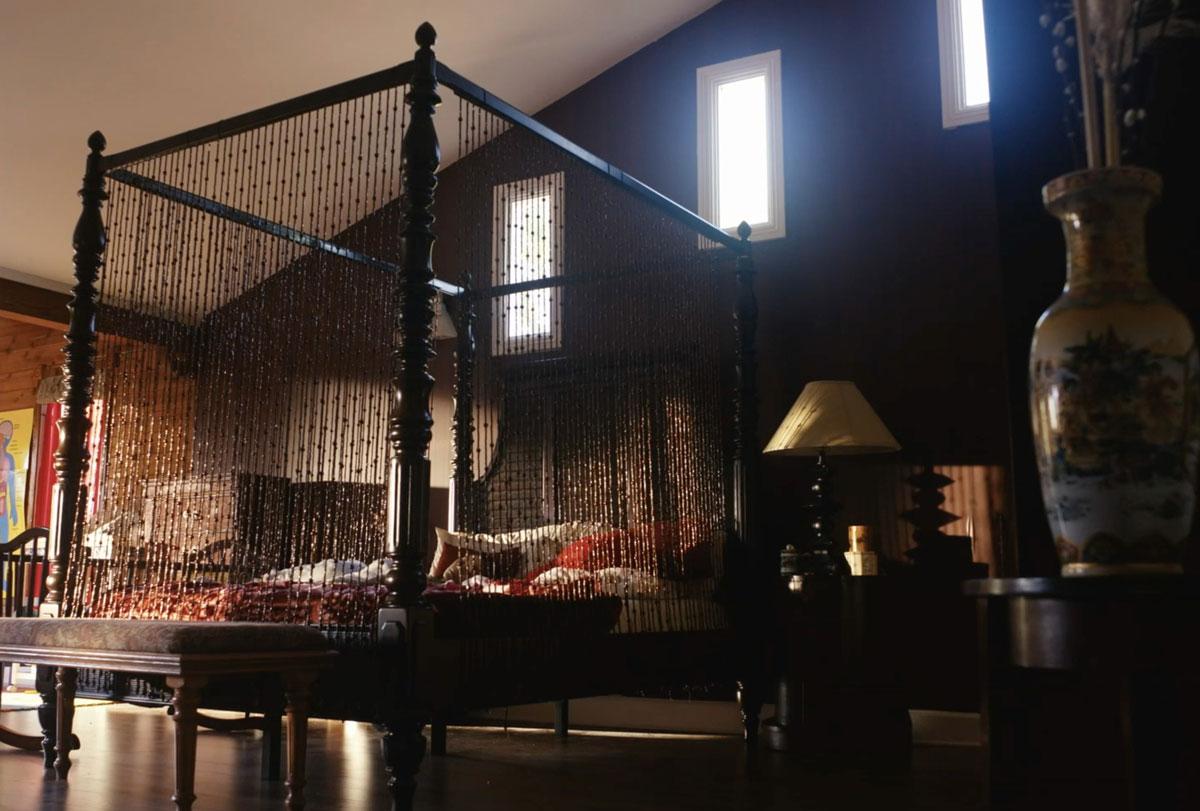 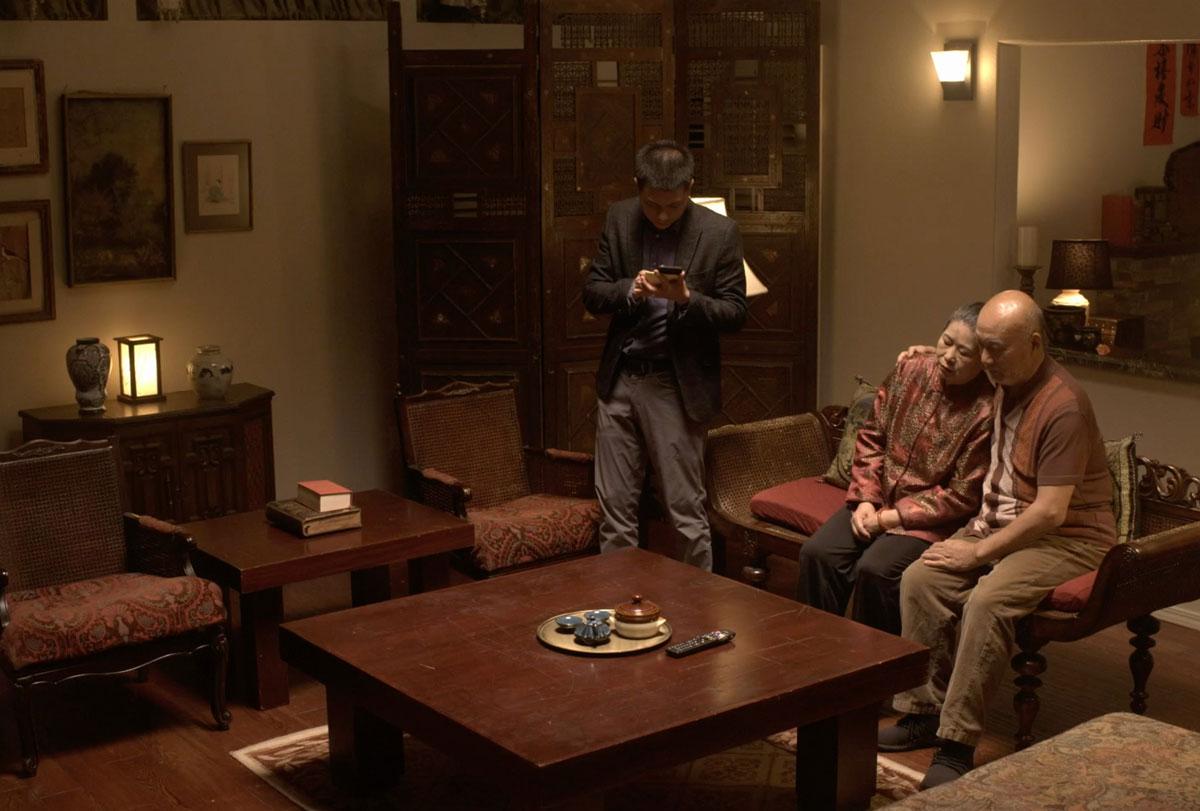 4. You also got into the Art Director’s Guild’s Production Design Initiative program, which is a big accomplishment in this Industry. It is one of the more “sure shots” way to break into the Art Department world, in a sense. Can you tell us about this program, how you got in, and how it aligns with your future career goals?


A: All the time that we got during the various lockdowns of COVID helped me focus on several paper projects in 2020 and 2021, which all eventually ended up in my portfolio for the ADG Apprenticeship program. I also had a great network of peers, professors, and professionals that I constantly poked to give me feedback on my application. I think it was a combination of all this that helped me get into this program on the first try! My final portfolio consisted of literally any and every design skill that I have, starting with Pinterest board research images, to 3D modelling, physical miniatures, illustrations, finished 3D renders, graphic designs, and construction drawings to name a few. My aim is to be able to join the Art Director’s Guild, or Local 800 under the IATSE umbrella, as a Set Designer and Art Director, and the PDI has been very prudent in helping me gain skills needed to be a good Art Director through real-world experience. It has also helped me immensely with networking in the industry! The program even helped me get a foot in the door through work on major shows such as Never Have I Ever, Snowfall, and my current work on an upcoming Netflix feature film starring Jennifer Lopez. 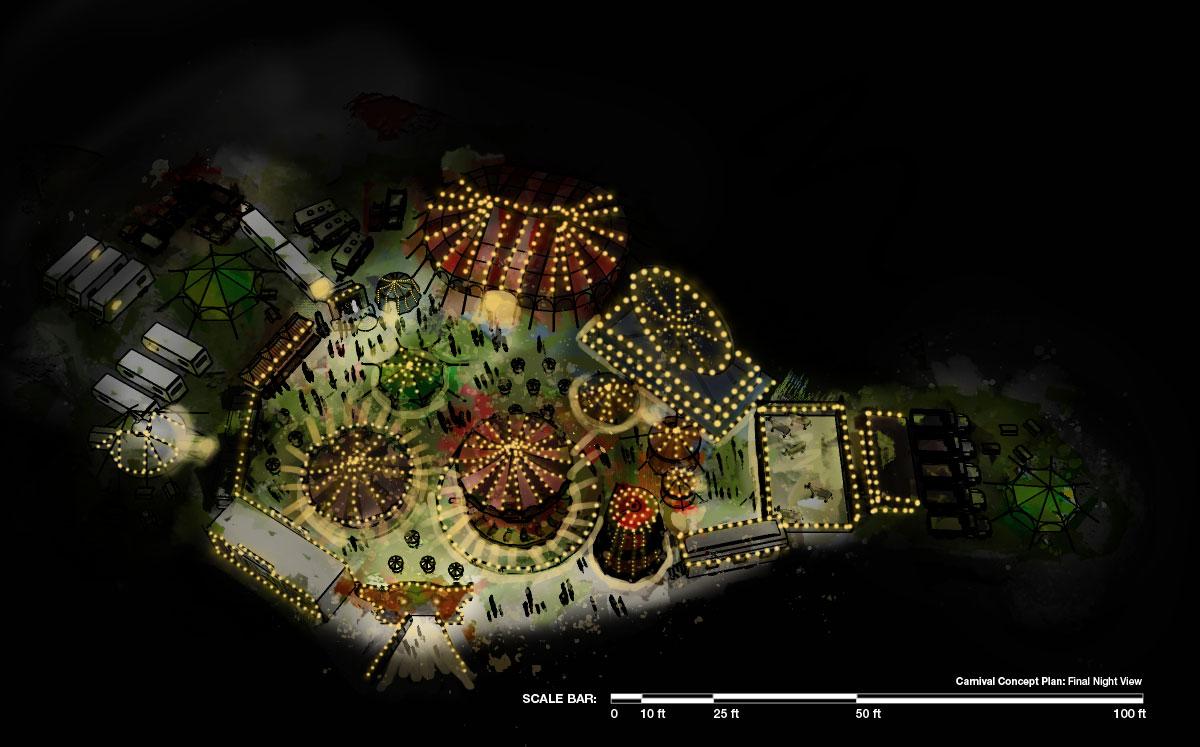 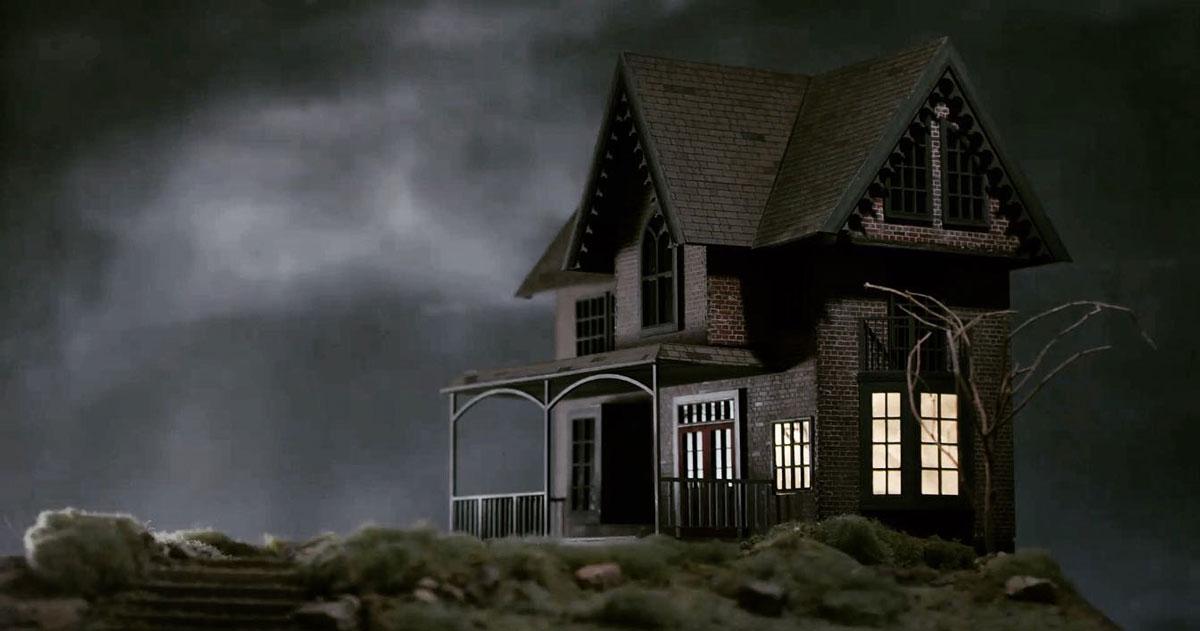 Miniature used as exterior for TV Pilot The House

5. What advice would you like to give to anyone trying to break into the Art Department right now?


A: Be persistent. While this is definitely not the easiest industry to be in, email as many people as you can to get that first job in the industry. It took me a second to fully grasp this, but literally the worst thing that can come from cold emailing is that they won’t reply to you, and that’s that! In my experience, though, peers are usually very happy to chat with you and give you valuable advice. During my first round of job-hunting and cold emailing I got a reply from Brian Harms who is the Production Designer for Grey’s Anatomy, and that was honestly so heartwarming to see! And finally, Facebook is your friend! I have gotten multiple jobs and networking opportunities through Facebook art department groups! The people on there are always keen on giving advice to people trying to break into the industry and are a great resource to have!

The House and A Dire Strait have been gaining international recognition on multiple platforms. A Dire Strait is expected to have its world premiere at a major Los Angeles film festival in summer 2022, and The House has been selected by Chapman University to be sent to BAFTAs.